A strong year in the Memphis-area residential real estate market has the potential to carry over into 2017 and even beyond. 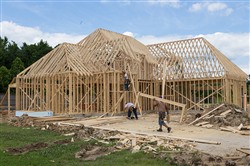 Low inventory and the talk of potential interest rate increases are some of the main factors contributing to a competitive market.

“I think over the last couple of years, our inventory has been a little low, so the market has been pretty competitive,” Lauren Harkins Wiuff, who works for Marx-Bensdorf Realtors, said. “One thing I think we saw a lot of this year, and especially during the hot times – spring, summer, early fall – was multiple-offer situations.”

In addition to low inventory, the mere talk of raising interest rates, which have been historically low for years, often increases activity in the market.

“I think a lot of people possibly will get off the fence with the little uptick in the interest rates,” Crye-Leike Real Estate Services sales leader and vice president Chet Whitsitt said.

When the Federal Reserve increased a key overnight interest rate for banks by 0.25 percent in mid-December, chairwoman Janet Yellen hinted another three such rate hikes could come in 2017.

Whitsitt said the interest rate talk is also inspiring people who would normally wait until spring to test the market early, which is helping keep the market warm during the cooler months.

“They are not going up a lot, but any uptick will get a lot of people off the fence,” Whitsitt said. “The fear of loss is always greater than the desire for gain.”

Another factor contributing to the strong market is the record-low drop in foreclosure activity in Shelby County.

Chandler Reports data from November showed that foreclosures were down 23 percent year-to-date from the same period of 2015.

“Short sells and foreclosures have really tapered off, because of a strong economy and a rise in prices,” Whitsitt said.

Whitsitt and Wiuff both say the increase in real estate activity was spread evenly across the whole city, and not just isolated to the traditionally popular areas.

“Even Cordova has been hot,” Whitsitt said. “There has been so many multiple offers in Cordova. Whitehaven has been a hot market. There is no one area that’s been isolated out of the windfall that I know of.”

Whitsitt said that infrastructure and quality-of-life improvements in the Shelby Farms area has contributed to Cordova becoming a “hidden gem,” especially for first-time homebuyers.

However, since the city has also put a concerted effort into improving accessibility and quality of life in core sections of the city such as Downtown and Midtown, individual buyers have plenty of options to choose from.

“There are many different parts of town that are going to obviously attract different people,” Wiuff said. “But I’ve had young, single guys move out to the suburbs and I’ve had married couples with young kids move Downtown. It’s been kind of a hodgepodge.”

MEMPHIS, TN – April 1, 2020 – Boyle Investment Company, through an affiliate Poplar Corridor Investments, LLC, is pleased to announce the acquisition of four “Class A” office buildings from Highwoods Properties, Inc. totaling around 600,000 square feet which includes the Triad Centre and International Place II. This transaction is an affirmation of Boyle’s long-term […]

Mark Halperin, EVP/COO, Boyle Investment Company Named to Memphis Business Journal’s Power 100 Mark Halperin has a subtle type of power.  He’s not often in front of the media, but he can get its attention whenever he wants it.  In 2018, Halperin helped land East Memphis a TIF district, despite it reportedly being opposed by […]

Biggs: September kicks off a fall full of food events

The Daily Memphian By Jennifer Biggs It’s time to get the calendars out. Once Labor Day passes, the events start coming fast. Here are some coming soon. Sip & Shop at Regalia is 5-7 p.m. Sept. 12 at Regalia Shopping Center at Poplar and Ridgeway. Tickets are $20 online through Sept. 11 and $25 on site. […]